Home » 3D TV Is Dead—What You Need To Know 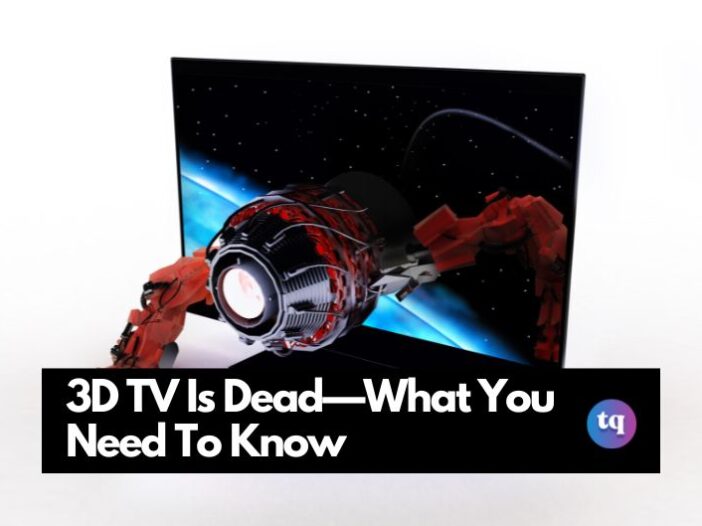 3D TVs are dead! They were sought after before their demise. However, they weren’t fashionable for a long time.

Moreover, manufacturers have stopped producing them since 2016. For those 3D fans who enjoyed the technology, the demise of this television was sad news.

But what caused the demise of 3D TVs? Well, that’s what we’ll be looking into, along with what’s ahead for 3D fans.

A 3D television conveys depth perception to the viewer through multi-view display, stereoscopic imaging, 2D-plus-depth, or other forms of 3D display.

While most 3D televisions use a polarized 3D TV system or an active shutter, others are autostereoscopic and can be used without glasses.

What Is Good About 3D TVs?

Although there are no 3D TVs for sale, there are noteworthy things you should know about them.

Because of the additional processing (motion response, black level, and good contrast) required to make 3D look great on a TV, it spills into the 2D environment. This gives you an excellent 2D viewing experience.

If your movie is not transferred or played in 3D, you don’t have to worry! Some 3D televisions perform real-time conversions from 2D to 3D.

However, this experience doesn’t compare to originally produced 3D content. But it can give your content perspective and depth if used correctly (for example, by watching live sports).

Meanwhile, it is preferable to view originally produced 3D instead of one converted from 2D.

It’s one thing to see a 3D film in the cinema. But seeing 3D PC/video games, television programs, and 3D movies from the comfort of your home is a different experience altogether.

Whatever the case, 3D content made for home viewing, if produced well and if you have a well-adjusted 3D television, can give you a top-notch viewing experience.

Remember, 3D viewing is more enjoyable on a large screen. Even though 3D is available on televisions of various screen sizes, watching 3D on a 50-inch screen or larger or a video projection screen is a more enjoyable experience since the images cover more of your viewing area.

What Is Bad About 3D TVs? Why 3D TV Failed

As much as there are good things about 3D televisions, there are also disadvantages. Let’s look at them below.

Most people don’t like wearing those special 3D glasses. And some are less comfortable than others. Further, these glasses could contribute to 3D headaches than actually viewing 3D.

In addition, using 3D glasses narrows your field of vision, bringing a claustrophobic element to your viewing experience.

The perspective, layers, and depth of images viewed in 3D are not the same as the real-world view. Again, some people are color blind while some are stereo blind.

To know if you’re stereo-blind, try this simple depth perception test. Like people who prefer 2-channel stereo to 5.1-channel surround sound, many people who aren’t stereo-blind don’t like viewing 3D.

Additionally, would you have thought that plasma TVs selling for $20,000 when they initially came out would have sold for less than $700 before they were discontinued?

A similar thing happened to 3D TV—they were initially high-priced, but prices were reduced after some years. However, they were still more expensive than non-3D televisions.

4. The glasses are expensive

Even though 3D glasses do not bother you, their prices can. Since most LCD Shutter-type 3D glasses are sold for more than $50 a pair, the cost can be something to be concerned about. This mainly affects people with large families or many friends.

But some 3D TVs use Passive Polarized 3D glasses which are cheaper. Moreover, they cost about $10 to $20 a pair and feel more comfortable to wear.

If you feel the cost of a 3D television and glasses is a barrier, remember you’d have to get a 3D Blu-ray disc player for high-definition view. This can require extra dollars in addition to the glasses.

6. You may require a new home theater receiver

If your home theater receiver is not 3D-enabled, you can’t access the 3D from your blu-ray disc player. But there are workarounds to fix 3D video and surround sound audio access issues.

Unless there’s 3D content to watch, you cannot watch 3D. There are currently more than 400 3D titles on Blu-ray discs. But since the inception of Netflix, cable/satellite services, etc., pickings are slim, and offerings are limited.

On the other hand, it causes some people to feel dizzy. Generally, it can damage the eyes.

What’s Ahead Since 3D TV Failed?

In the United States and across the world, there are millions of 3D TVs still in use. 3D TVs are still used in China and some parts of Europe.

So, you can expect movies and other 3D content on Blu-ray soon. Although 3D isn’t part of the Ultra HD Blu-ray disc format, most people play 3D Blu-ray discs.

Additionally, you can still play your discs alongside any upcoming 3D Blu-ray discs if you have a 3D-enabled Blu-ray or Ultra HD Blu-ray disc player. There are still about 450 3D Blu-ray disc movie titles in addition to the forthcoming ones.

In the long term, there could be a comeback for 3D TVs. Manufacturers can re-implement 3D televisions for 4K, HDR, or other TV technologies.

However, this can happen if content providers, TV presenters, and producers want it that way. Furthermore, there could be 3D without glasses, with continuously improving results.

But think about this; would 3D have performed better if television manufacturers gave more thought to market demand, timing, consumer communication, and technical issues concerning product performance? Probably, or probably not.

But many mistakes were made, and it looks like 3D television may have run its course.

Check Out: How to Fix a Glitchy TV Screen

What’s In For 3D Television Fans?

Even though 3D failed, it still has many fans who are sad about its demise. But does that mean there’s no comeback of 3D televisions in the future?

Since it has been around for years, it’s likely to resurrect in movie theaters. However, we can’t say if it will ever be suitable for the home viewing experience.

Meanwhile, there have been discussions about 3D televisions that won’t require people to wear unconventional 3D glasses.

Well, it’s possible to have 3D TV and movies without glasses. And there have been cases of glasses-free TVs at CES—the massive consumer tech expo that holds in Las Vegas yearly. For example, the prototype Samsung 8K 3D television from 2015.

But, none have succeeded because of some issues. The major challenge was that without the 3D glasses, you would have to stand or sit in the correct position in front of the TV without moving.

And if you don’t stay in the exact correct position, the image changes and the 3D effect will not function correctly.

3D television was a fad, and guess what! Fads last for a short time!

If you have never heard about 4K resolution, it’s quadruple the picture quality of full HD. And it can produce passive 3D content that you’d like to watch.

Are 3D TVs worth buying?

There are several benefits that 3D television brings to you. The fact that consumers could watch it at home was a desirable aspect. And if the content was produced well with an accurately adjusted 3D television, it could give you a breathtaking viewing experience.

For many people, 4K TV is more convenient than 3D. 4K viewing doesn’t need more effort, unlike viewing Full HD – you only turn on, sit, and watch. It doesn’t involve extra accessories and face-wear too.

Yes, you can use a 3D television to watch regular tv, like 2D movies or cable.

Are there 3D TVs without glasses?

You must wear special glasses to watch 3D on a TV. These are high-tech active LCD Shutter glasses.

Although there are several fans of 3D TVs, its production was discontinued years ago. And we cannot say the actual thing that led to its demise. But different factors are to be considered.

Moreover, when talking about technology, things come and go rapidly. So, it’s difficult to tell if 3D televisions will revive in the future. And if they do, there could be a 3D TV without wearing glasses.

But everything summarizes that 3D television is dead; however, technology comes and goes. So, there could likely be a comeback.