Home » Why Is My iPad Not Charging? Quick Fix 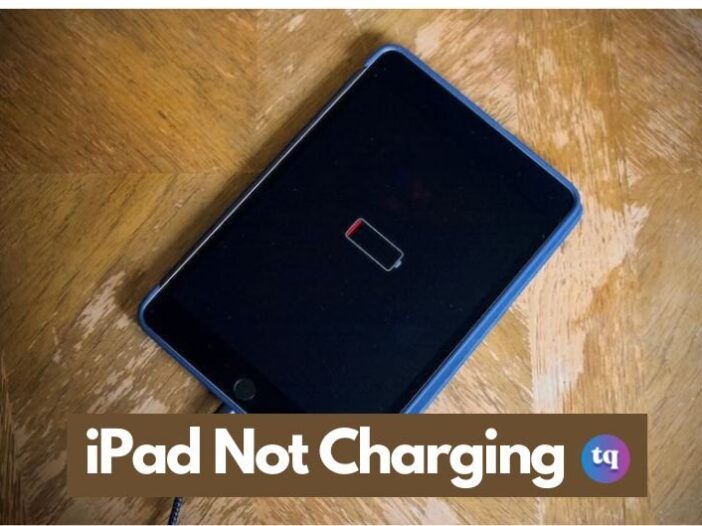 Nowadays, most are so reliant on electronic devices. As a result, they believe it’s difficult to complete daily tasks without these devices, including the iPad. However, common issues with iPads include them not charging or charging very slowly. It is also possible that your iPad won’t charge past a certain point.

You must be attempting to charge your iPad, but the screen remains blank without displaying the charging symbol. This will be a very inconvenient situation because you may be in the middle of completing a task on your iPad, and it may soon become completely discharged.

Depending on the iPad, charging is accomplished via a Lightning or USB-C cable. Both are reversible, allowing you to use either end of the cable. Within the box, modern iPads include a 20-watt power adapter. If you employ a weaker one, it’ll charge slower than usual.

This unpleasant situation is often overcome in a variety of ways. It’s also critical to understand why such an issue may arise whenever you attempt to charge your iPad. You’ll use the methods in this article to resolve the issue of your iPad not charging and resume normal use of your iPad without worrying about it becoming completely discharged. So read on!

What Does It Mean For An iPad To Not Charge?

When you see the “Not Charging” message on your iPad, it means either your iPad is charging slowly or not charging at all. Consider the following scenario: your iPad isn’t charging, and you only have 25% battery life left. The primary question that comes to mind is, “Why isn’t my iPad charging?”

It can occur when your iPad isn’t getting the optimum power supply from the charging unit. If the charging port is clogged with debris or some foreign object, it can also cause a charging issue. An outdated iOS version or bug can also be another probable reason.

You might love to check out: How to Share Photos, Websites, and Files on the iPad | Full Guide

What Are The Possible Causes Of The iPad Not Charging?

Here are a number of the causes of charging problems on your iPad. One of the four components that work together to charge your iPad is most likely to be at fault.

Sometimes charging problems are caused by software issues. For instance, there is a chance that a software bug is causing issues with your iPad’s charging function. Check your iPad for brand-new updates and install them.

Lightning cables may have issues that are not immediately apparent. Whether or not your original cable appears in perfect condition, try charging your iPad with a special cable to rule out any bugs or issues with it.

How To Fix iPad Not Charging Issues?

Check out some tried-and-true solutions to the iPad not charging problem below.

If your iPad still doesn’t charge after you plug the USB cable several times, a fast reboot can help. This will resolve the software issue as well as the charging issue. You’ll reboot your iPad in the below process.

iPad with a Home Button

1. Long-press the highest button until the power-off slide option appears on the screen.

2. Swipe the facility off the slider and wait for your iPad to power off.

3. To reactivate it, press the highest button for a long time. Repeat this process until the Apple logo appears on your iPad’s screen.

iPad without a Home Button

1. Long press one of the volume buttons and the top button simultaneously until the power off slider appears on the screen.

2. Swipe down the slide. It’ll take some time to complete the shutdown.

3. After that, long-press the highest button on the iPad until the Apple logo appears. It’ll activate the iPad.

Apple recommends that users use charging accessories that are MFi-certified. Employing a counterfeit charging cable or adapter can cause damage to your iPad’s battery and other internal components.

To get a high-quality charging capacity, search for the MFi certification labeled “Made for iPhone| iPad| iPod.” You’ll also learn how to detect fake charging accessories by visiting the Apple Support page.

3. Clean the Charging Port on the iPad

First, inspect the charging port with a flashlight. You’ll notice anything that is clogging the port. You’ll clean with an anti-static brush or other blunt objects. We advise you to use a non-conductive material. You’ll also blow in hard. It can also aid in the removal of debris within the port.

Make sure to turn off the iPad before beginning the cleaning process.

4. Allow the iPad to cool to room temperature.

The iPad’s moderate operating temperature ranges from 0 to 35 degrees Celsius, consistent with Apple’s official support page. If the temperature becomes too hot or too cold, it can obstruct charging and reduce battery life.

As a result, you need to set the iPad aside and allow it to return to its normal operating temperature. After the iPad has returned to a normal temperature, try charging it. Keep your iPad out of direct sunlight while charging.

5. Examine the charging cables and the adapter.

The issue may be with the charging cable or the adapter. If either of those two is faulty or damaged, your iPad will not charge.

The first step is to determine whether or not the adapter is operational. Attempt another adapter. If the matter persists, it’s not due to the adapter.

Examine your charging cable now. You’ll try charging the iPad with a separate USB cable to see if the problem goes away.

6. Use an acceptable USB power adapter.

If you charge your iPad with a lower-voltage adapter, you’ll experience the iPad not charging or charging slowly. As a result, you need to be aware of your iPad’s power requirements. Depending on the model of your iPad, an influence adapter of 10, 12, 18, or 20 Watts is required.

Also, avoid charging the iPad via computer because the facility difference may cause the charging issue.

An outdated iOS on your iPad can cause software bugs that obstruct the charging process. As a result, updating your iPad to the most recent iOS version is required to resolve the issue.

3. After that, select “Software Update.”

5. Following that, you need to enter your iPad’s passcode. The device will take a while to download the update.

8. Force the iPad to restart.

When the firmware crashes, the charging problem can also occur. A force restart is often useful in this situation. It can also assist in resolving the software issues that are causing the problem. To accomplish this,

iPad with a Home Button

1. To begin, long press the home and top buttons simultaneously.

2. After you see the Apple logo on the screen, release both buttons.

iPad without a Home Button

1. Quickly press the quantity button near the top of the screen.

3. Hold down the highest button for a long time.

When you see the Apple logo on the iPad’s screen, release it.

9. Go to your local Apple Store.

Even after you’ve tried everything you can think of, your iPad still won’t charge. It indicates that you simply have a serious problem and should seek professional assistance. As a result, we recommend that you simply take your iPad to a nearby Apple store.

What Are The Consequences Of Ignoring iPad Charging Issues?

This problem is often very frustrating, especially if you are trying to fix it yourself. If you don’t resolve the issue, it’ll have the same effect on your iPad as any other technical issue. Here are a number of the consequences:

1) You risk losing programs, data, and files on your iPad. While this might not appear to be a big deal, it can become an issue if you rely on your iPad for work or learning materials and cannot access them.

3) This issue may cause damage to your iPad. If your iPad isn’t charging, it’s because its circuits aren’t working properly. It will cause your iPad to malfunction, completely break, or blow out.

4) The battery within the iPad will eventually die. It happens when your iPad gets too hot, causing the facility source not to work as well as it did previously, causing it to stop working after it is too hot.

How am I able to bring a flat-battery iPad back to life?

To revive a flat battery iPad, hold and press the home and power buttons simultaneously for 10 seconds, then wait for the Apple logo to appear on the screen. If you do not see it booting up, your iPad’s battery may be dead. Leave it plugged in overnight.

Why isn’t my iPad charging, although it’s plugged in?

What do I have to do if my iPad won’t turn on or charge?

Change the facility adapter or use a different Lightning cable to fix an iPad that will not turn on or charge. If that does not work, check your iPad’s temperature to see if it’s too hot or cold. Keep it cool and dry if your iPad is hot or warm if it’s cold. After an hour, try turning it on again.

Does the temperature affect how quickly my iPad charges?

If your iPad is too hot or cold, it won’t charge normally. Temperatures below 32°F or above 95°F should be avoided. If you leave your iPad in your parked car, the temperature may rise above this range, permanently reducing battery life. If a temperature warning screen appears, don’t attempt to charge the device.

What should I do to quickly charge my iPad?

If you want a quick charge, activate Airplane mode and reduce the screen brightness within the iPad Settings. Close any open apps and, if possible, refrain from using the iPad while charging.

The iPad not charging problem is often very frustrating, but there are several solutions available. This issue is presumably caused by one of your iPad’s problems, so you should try everything you can immediately. Contact an Apple Authorized Service Provider or a repair center to fix this.

We hope this guide has helped you figure out why your iPad won’t charge. If your iPad still won’t charge after you’ve tried every method listed above, take it to an Apple Store near you. Issues can arise no matter how new or old your iPad is.