Home » How to Close Apps on Apple Tv: Simple Steps 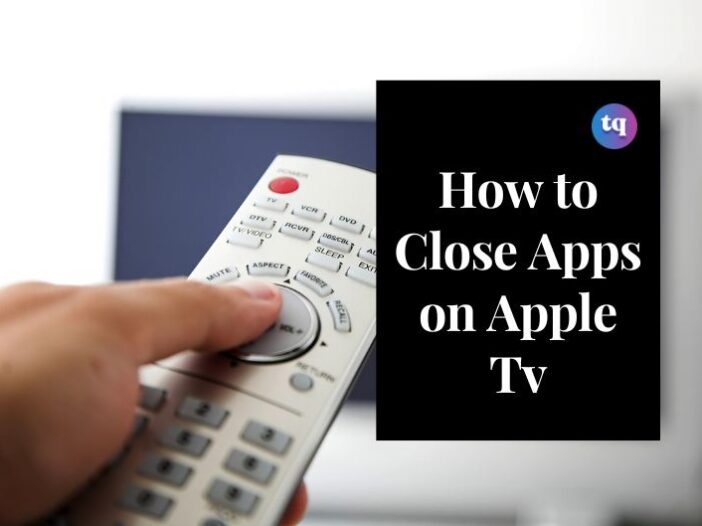 Some people think that once you buy an Apple product, you’re stuck with it for life. But that’s not the case! This article is for you if you have an Apple TV and want to know how to close apps on it.

You can learn how to close apps on your Apple TV in just a few simple steps. Whether you’re finished using an app or want to free up space, follow these steps and say goodbye to your app!

How Do I Close Apps On Apple TV Remote?

On Apple TV, you may rapidly navigate between different apps without going back to the Home Screen. On Apple TV, switching between apps operates very similarly to multitasking on an iPhone, iPad, or iPod touch. You may force an app to shut down and then reopen it from the Home Screen if it isn’t functioning properly.

On the screen, windows for each open program are displayed in a row.

Step 2. Switch to an alternative app in the screen’s center while in the app-switching view, then choose one of the following actions:

To make the highlighted app close: On the touch screen or clickpad, swipe up.

See also: How to Connect Apple Tv to Wifi Without Remote | Quick Fix

How Do I Clear My Screen of Open Apps?

On more recent Apple TV models, the initial app doesn’t close when you go to another one. Instead, it will be running in the background so that when you switch back to it, it will open promptly.

If you switch between apps frequently, this can be a problem. Your Apple TV system as a whole may become unresponsive if one program freezes. You will have to shut it in this situation.

But keep in mind that only the Apple TV 4K and Apple TV HD devices are affected by this. An app automatically quits when you exit it on prior Apple TV models.

How Can I Control My Apple TV 3rd Gen Without a Remote?

I bet you have an iOS device in your home if you have an Apple TV. As long as everything is linked to the same Wi-Fi network, you can operate your Apple TV using the free Remote app on your iPhone, iPad, or iPod Touch.

To associate the app with your Apple TV after installation, tap the Add Apple TV button. If you don’t see it, check to see if your Apple TV and iOS device are both using the most recent versions of their respective operating systems and connected to the same Wi-Fi network.

How to Quit Multiple Apps at the Same Time on Your iPhone or iPad?

If you’re like most people, your iPhone or iPad undoubtedly has a lot of apps active at any given time. And while closing one app at a time is simple, simply swiping up from the bottom of the screen, doing so when you have several open and need to close them all can be time-consuming.

On your iPhone or iPad, there is a quick way to close numerous apps simultaneously. The steps are as follows:

1. To get the multitasking view from the home screen, swipe up from the bottom of the screen.

2. All of the open apps on your device are displayed in the multitasking view. Swipe up on an app to close it.

3. Once all of the apps you want to close have been closed, repeat step 2 for each additional app.

That’s all there is to it! Now that you know how to close several apps on your iPhone or iPad fast.

You might find this useful: Apple Watch Stuck on Apple Logo: Quick Fix

Can I Still Use Apple TV 3rd Generation?

Depending on the model, older Apple TVs may still be functional. Before putting them in the recycling, find out which services are still accessible.

Apple TVs of the fourth generation and beyond later renamed Apple TV HD, have access to a complete App Store where programmers can publish apps. Previous iterations could only access content that was hosted on an Apple server.

At least the third-generation models of Apple TVs can still be used by owners of obsolete models who recently updated. The number of software developers who still support the older model is dwindling.

These Apple TVs will eventually stop doing anything other than receiving AirPlay signals, which might still be preferable to nothing.

How Do I Close Apps on Apple TV With click only?

Follow these instructions to close any open apps on your Apple TV:

1. Using your Apple TV remote, click on the app you want to close.

2. After choosing the app, press and hold the “Menu” button on your remote for roughly 5 seconds.

3. A small popup menu will show up on the screen after you continue to hold down the “Menu” button. The software will close once you just choose the “Close” option from this popup menu.

Also check out: How To Fix It When Apple CarPlay Is Not Working

How Do I Close Screens on Apple TV?

There are two ways to close apps on your Apple TV: from the Home screen and from within the app.

To close an app from the Home screen, highlight the app icon and press and hold the Touch surface of the Siri Remote until the icon starts shaking. Then, press the Play/Pause button.

To close an app from within the app, double-click the Home button on the Siri Remote to bring up the App Switcher. Highlight the app you want to close and then swipe up on the Touch surface of the Siri Remote.

How do I close apps on my Apple TV?

To close an app on your Apple TV, double-press the Home Button on the remote.

How do I close all Apple apps at once?

While there isn’t any way to close all of your apps at once, you can swipe off up to three apps at a time by using the appropriate number of fingers.

How do I close apps on Apple TV with a click only?

Swipe up to close the app.

Is it better to keep apps open or closed?

Closing Apps Consumes More CPU Power.
As your apps are better off staying in memory, engaging your CPU in these commands is a waste of processing power.

How do I stop apps from running in the background?

The article offers a few simple steps on how to close apps on Apple TV. It starts by explaining that double-clicking the Home button will bring up the multitasking bar. Then, users can scroll through the open apps and select the one they want to close. To do this, they need to click and hold the touchpad until a red circle with a white minus sign appears. Once selected, they can press the play/pause button to close the app.