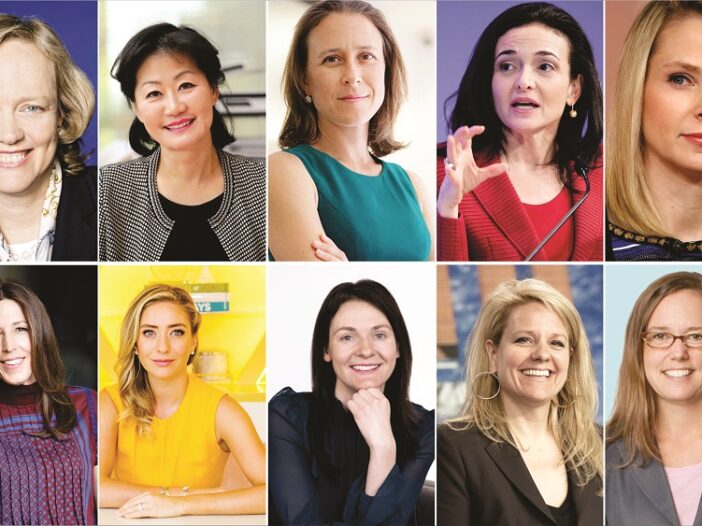 Men traditionally control the technology business, but these days, amazing top women in tech are changing the narrative.
Although many incredible women work in this sector, they are often underrepresented or unnoticed.

In recent years, new technologies have significantly improved and changed people’s lifestyles and interactions with each other. They also can affect people’s livelihoods in all industries and demographics.

What Percentage of Women are in Tech?

Currently, women hold only 20% of all roles in large technology companies. But as the industry has a strong influence on shaping the future, women must make up an increasing part of the technology sector and benefit from the booming industry.

Even in today’s advanced environment of the 21st century, statistics on top women in tech can be depressing. But there are many female technological influencers on whom you can look for inspiration.

These women are slowly but steadily challenging the stereotype that the computer business is a male-dominated environment where women cannot succeed.

We have introduced the 20 top women in tech – influential women who have made a name for themselves in various technology fields. We look closely at their experience, choice of profession, and achievements because their work is motivating.

READ ALSO: 20 Top Tech Companies to Work for in UK

Gwyn Shotwell is the President and Chief Operating Officer of SpaceX. It is worth $ 460 million and operates a commercial space exploration company founded by Elon Musk. She joined the company in 2002 as the 11th employee of SpaceX.

Shotwell became president of the company after her role in the successful negotiations for the first contract for the commercial supply of services with NASA in December 2008.

She was responsible for directing the Falcon Vehicle Manifest for more than 50 launches, which generated $ 5 billion in revenue. She served on the Board of Directors of the California Space Agency.

In May 2020, the company first sent astronauts to the International Space Station under a contract with NASA.

Known as one of the top executives on Wall Street, Sally Crouchek is the co-founder and CEO of Ellevest. Not surprisingly, Kravcek has held several management positions in financial services. Including Sanford C. Bernstein & Co, Smith Barney, Citibank, Merrill Lynch and the PaxEllevate Fund.

In addition to his work at Ellevest, Kravcek is currently the Chairman of the Board of the global professional women’s network Ellevate Network.

Ellie was recently named Forbes and AI Summit, Artificial Intelligence Innovator of the Year, LinkedIn Top Voice for Technology, and serves as AAA National Ambassador and Advancing Women in Product.

Previously, Allie was the youngest woman to ever create an artificial intelligence product at IBM, leading the development of the product through computer vision, conversation, data, and regulation.

Alyssa Henry is the Executive Vice President of Square. She heads the business unit “Seller”, the company’s largest branch. Alyssa previously worked for Amazon, where she managed all AWS file storage businesses, including her core product, S3.

In 2020, the Seller’s division processed more than two billion payment cards and received $ 1.5 billion in gross revenue for Square. She has worked for Microsoft and on the boards of Intel and software developer Unity Technologies.

Allison Kapin is a founding partner of Rad Campaign, W Fund, and Women Who Tech. A serial entrepreneur, Kapin has built a network of more than 65,000 engineers, entrepreneurs, investors, and industry leaders.

She is a member of the board of directors of the League of Women Voters, as well as the board of Anita Borg Institute, Tiv O’Reilly Gov 2.0 Expo, and the NTC NTC Committee.

Kapin began her career in marketing and public relations and received a master’s degree from the American University, where she graduated in multimedia and Internet marketing.

Marissa Mayer is a co-founder of Sunshine Contact, which focuses on artificial intelligence and consumer media. She was previously the president and CEO of Yahoo! the position she held from July 2012 to 2017, when she resigned.

Mayer was also the first female engineer and 20th Google employee to perform a variety of roles, including director of consumer web products.

After Yahoo, Mayer founded the Lumi Labs technology incubator, which was renamed Sunshine in November 2020. She also serves on the board of Walmart, which she joined in 2012.

Aishwarya Srinivasan is an innovation leader in artificial intelligence and laundering at IBM Data & AI. She works cross-cutting with the product, data research, and sales teams to explore AI usage options for customers, conducting opening workshops and creating assets to demonstrate the value of technology to business.

She supports open-source technologies; she was a developer at PyTorch Lightning and was previously the author of Scikit Learn. She has a graduate degree in data science from Columbia University. She is an ambassador for women in the Data Science community.

Helen Yu is the founder and CEO of Tigon Advisory and the author of the best-selling WSJ. It promotes the growth of technology companies, from startups to global titans such as Oracle and Adobe and helps CEOs achieve multibillion-dollar revenue growth and record profitability.

She is an advisor to the board of fast-growing SaaS companies and is a member of the board of the Global Cyber ​​Security Association.

She has performed at SXSW, TiECon, DMS, and Money2020. An avid adventurer who traveled to the mountains.

Michelle Zatlin, Chief Operating Officer and President of Cloudflare, a web infrastructure and security company, co-founded it in 2009.

Cloudflare protects the websites of more than 4 million customers from cybersecurity threats, such as distributed denial of service (DDoS) attacks, which use web servers filled with malicious traffic, making them inaccessible.

She is also the founder of DATAcated Academy – which conducts training on best practices in data visualization. She has completed several courses on data storytelling, technical devices, and best visual practices.

In addition, Kate hosts the DATAcated conference and the DATAcated On Air podcast. Kate was named LinkedIn’s best leader in data science and analytics in 2018 and 2019.

Anne Wojciechowski is the co-founder and CEO of 23andMe, a pioneering consumer DNA testing firm. Anne founded the company in 2006 with Linda Avey and Paul Cousins ​​to address the sore point that most people do not have access to genetic information that could provide information about a cure for a disease or treatment.

23andMe has received support from Google, GlaxoSmithKline, Sequoia Capital, Johnson & Johnson, and others. The company has raised more than $ 873 million in funding.

In June 2021, 23andMe unveiled SPAC, sponsored by the Virgin Group of British billionaire Richard Branson. The company’s genome test kit was named Time’s “invention of the year” by Time magazine in 2008.

Lampkin has spent more than 18 years in the technology industry, founding two startups and working for well-known companies, including Microsoft, Lockheed, Deloitte, Northrop Grumman, and TripAdvisor.

She holds a bachelor’s degree in management and engineering from Stanford University and an MBA from the Sloan School of Technology’s School of Management and is named Fortune 40 to 40 magazine.

Whitney Wolfe is the CEO and co-founder of the Bumble dating program. She became a self-made billionaire after publishing her company on the NASDAQ.

She founded the dating app in 2014, leaving Tinder with the help of one of the first investors, Russian billionaire Andrei Andreev, who also has a stake in Badoo.

Jenny Just and her co-founder started PEAK6 Investments in 1997 with $ 1.5 million in start-up capital as an options firm. Today it is a multibillion-dollar financial services and technology company with an average annual return of 57%.

Sheryl Sandberg, worth $ 1.8 billion, is one of the top women in the tech industry – an American business manager and philanthropist. She has been Facebook’s chief operating officer since 2008, helping to dramatically increase the company’s revenue on social media.

She is one of the most influential technological women. Before Facebook, Cheryl was Google’s vice president of global online sales and operations.

She served as President Clinton’s chief of staff, a McKinsey & Company management consultant, and a World Bank economist. Sandberg works on Facebook, ONE, and SurveyMonkey boards.

SHI International, which has more than 20,000 customers, serves customers around the world, including Boeing and AT&T. When she co-founded SHI in 1989, it was a $ 1 million reseller.

Today, it is the largest minority/women’s enterprise in the United States, with revenues over $ 11 billion in 2020 for the first time.

Egyptian-American computer scientist Rana el Kalubi aims to bring emotional intelligence to the digital world.  She founded Affectiva in April 2009 and has since grown into one of the leading companies in the field of artificial intelligence.  She is the author of The Decoded Girl, a book about her personal journey from the Middle East to the United States.  She holds a bachelor’s and master’s degree from the American University in Cairo, a Ph.D. from Cambridge University, and a postdoctoral dissertation from the Massachusetts Institute of Technology.

Meg Whitman, worth $ 6.1 billion, is one of the top tech industry women and a Silicon Valley veteran. It is best known for eBay’s sales growth of $ 5.7 million. She left eBay as a billionaire. She served as CEO of various billion-dollar technology companies.

She was CEO of Hewlett-Packard from 2011 to 2015, where she oversaw its division into HP Inc. and Hewlett Packard Enterprise. She is also a board member of Procter & Gamble and General Motors.

ShivaniSiroya is the founder and CEO of Tala Mobile Technology and Data. The application seeks to understand its customers’ finances using the data on their devices. Siroya is a Columbia University graduate majoring in Econometrics, Quantitative Economics, and Health Economics.

She has worked as an analyst at several major financial services firms, including Credit Suisse, UBS, PwC and Citigroup. Before founding Tala, she was a financial advisor at HealthNet. Siroya is also a young global leader at the World Economic Forum.

Microsoft veteran Margaret Arakawa has spent much of her career building brands and growing her business. For twenty years working with Microsoft, she has been responsible for developing product strategies and most recently led the Windows and Surface business in the United States.

Arakawa now serves as CMO Outreach, a computer software platform that manages B2B sales. A graduate of the Wharton and Kellogg School of Management, he is also an avid fundraiser for the fire-fighting rise of the Leukemia and Lymphoma Society.

FAQ on Top Women in Tech

Who is the famous lady from the field of tech?

Ada Lovelace: The World’s First Computer Programmer. Ada was the daughter of the romantic poet Lord Byron and his wife, Anna Isabella-Byron. Her mathematical talent shone through in her early life, and her skills and interest in machines led to a working relationship with Charles Babbage.

Who started women in tech?

The origins of women in technology date back to the 1700s when Nicole-Reine Lepautre, a French mathematician and astronomer, predicted the return of Halley’s Comet by calculating the timing of a solar eclipse. Her team worked on the predictions for six months, and the result of her work was an astronomical triumph.

Who are the women in tech?

Women in Tech® is an international non-profit organization that aims to close the gender gap and help women embrace technology. We promote girls’ and women’s empowerment worldwide, focusing on Sustainable Development Goal 5b: harnessing technologies.

Who is the first female programmer in the history of computer?

Ada Lovelace
London-born Ada Lovelace (1815–1852) had a passion and gift for mathematics from a young age. She is credited with being the world’s first computer programmer, as she drafted plans for how a machine called the Analytical Engine could perform computations.

Who is the father of technology?