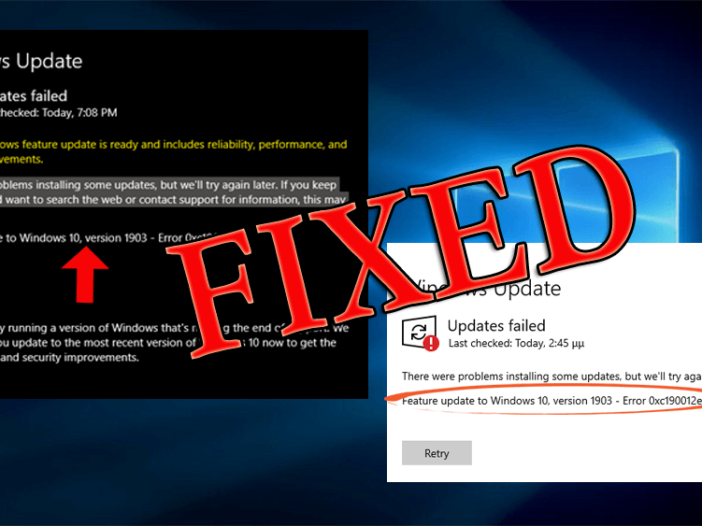 The latest Windows 10 update problems in 2023 include vulnerabilities such as PrintNightmare, which allows hackers to remotely access the OS and install their programs, and vulnerabilities in Windows Hello, a feature that recognizes faces and biometric fingerprints.

Although Microsoft has to solve many of these problems fairly quickly, if you encounter one, it doesn’t matter how soon the fix maybe – you want to know what’s going on with your PC and how to deal with it.

Despite its popularity, there are many problems you may encounter daily while using the system. One of these errors is Windows Update, which constantly crashes, so you can’t upgrade to Windows 10.

Why is the Latest Windows 10 Update Having Problems?

The problem seems limited to devices that rely on smart card authentication, such as printers in the office, where employees can print documents to their accounts while holding the card.

It is unclear why the latest update stopped all innovative card activity. However, Microsoft has assured those working in offices that authentication with a username and password on the printer should still work.

Microsoft added that it is recommended to check whether the latest drivers are installed on the affected devices.
Although it is claimed that it contains a bug fix that slows down the frame rate in games, it seems that the Windows 10 security update on July 10 did not solve the problem at all.

The disadvantage is that the frame rate slows down, which makes the frames look erratic and uneven. As Microsoft describes, the software results in “lower-than-expected gaming performance.” This is a particularly unpleasant problem, as it has existed since April, a quarter of a year.

Features of Latest Windows 10 Update in 2023

ALSO CHECK: What are the best windows troubleshooting tools?

These printing issues reappear in the latest security update KB5006670 for Windows 10. Like the September update, this is a problem for printers connected to the network.

Some users have reported that the update caused a print delay, and the print command takes 15 seconds before printing can begin.

A Reddit user also noted that one of these latest security updates is forcing Windows Server to change the network type to “private,” so you may need to manually change it back to “domain.”

Another solution suggested by the user was to restart the NLA-service, which will temporarily solve the problem until the next reboot. The best solution right now is to roll back the update.

This is good because security should always be a priority, but obviously, it comes at the cost of printer sharing and network printer functionality.
After the fix, users report that network printers have stopped working, even for users with administrator privileges. One user even reported that “hundreds of printers” in the office are not working now.

Microsoft now has unlocked registry settings that may resolve the issue, but it may make your computer vulnerable to exploits. It’s best to roll back the update (scroll down for instructions) and wait for the fix to be fixed before reinstalling it.

Quite often, one Windows update causes some problems (please continue, Microsoft – we thrive because of your incompetent update). But rarely do two updates released so close to each other cause the same problem.

Well, it’s the first time, and now Windows security updates in July and August (the last of which is required) cause the reliable Alt + Tab key combination to fail.

Alt + Tab is a shortcut to quickly switch between different open windows – this is probably one of the most important shortcuts, but users report that after these updates, it stops working for full-screen applications (such as games).

Obviously, you can’t Alt + Tab return to the full-screen application and you’ll see a black screen. For now, the solution is to remove the update, which will restore normal behavior. Scroll down to the “Fixes” section to see how.

Some users report that Dolby Digital 5.1 audio creaks or makes a lot of noise during playback through specific audio devices or programs. The problem concerns not only version 21H1, but also previous Windows 10 versions 20H2 and version 2004.

It is reported that the use of stereo audio will not face this problem, and for all concerned, there are several workarounds.

Turn on Surround sound settings by right-clicking the volume icon in the notification area, selecting “Surround (Off),” and selecting any available options.

Instead of waiting for this to be fixed, you can always manually revert to the previous version of the IME that worked for you. In the search box on the taskbar, enter Settings, then select it from the list of results or press the “Enter” key on your keyboard.

Enter the IME settings in the Settings search box and select the ones that correspond to your language. Select “General.” Enable Use a previous version of Microsoft IME.

We do not favor some data-sharing settings in Windows 10, and we recommend that all users review them periodically. Locate and launch the Settings app on the Start menu, then click Privacy. In the panel on the left, you will see many areas where your computer can exchange data.

Take the time to see if it’s convenient for you to allow apps to use your camera, microphone, account information, etc., and to check where you’re at to see if unexpected apps appear in the lists.

Also, note that the default Feedback and Diagnostics option is to send comprehensive data to Microsoft.

If you’re using Windows Defender, click the back arrow and select Update and Security, then Windows Defender. Make sure you are satisfied with the default behavior, enabling cloud detection and automatic sending of samples.

Windows 10 localization options seem unnecessarily confusing, and we’ve had a few reports of incorrect localization, even on computers that have been updated with adequately localized installations of Windows 7 or Windows 8.

The most common problem seems to be system dates set in the American MM / DD / YY, but Windows may also report that Cortana is not available, even in regions where it is available.

From the Start menu, find “Region” and select Region and Language Settings. Make sure the United Kingdom is selected in the Country or Region section and the selected languages ​​are displayed in the Languages ​​section.

Select your primary language, click Options, and then click Download under the language pack and broadcast options, if available. Check on this page that the keyboard is also correct – if not, add the correct one, then select the incorrect one and delete it.

Like Windows 8, Windows 10 uses a hybrid boot for fast booting. When you shut down the system, programs, and application processes, stop, but the Windows kernel goes to sleep to provide a faster restart.

Theoretically, it’s excellent but still very slow for some Windows 10 users.
Please turn it off by finding Power Options in the Start menu, launching the appropriate Control Panel applet, and then clicking Select what the power buttons do in the left pane.

Click the change settings that aren’t currently available, scroll down, clear the Enable Quick Launch check box, and then click Save Changes.

This should prevent very slow startup on the affected computers. Some users report that if they later reboot, track their steps, and re-enable Quick Launch, the issue remains resolved.

See How Long Does It Take to Install Windows 10?

How to Fix Latest Windows 10 Update Problems in 2023

If Windows 10 updates cannot be installed, try updating them using PowerShell. Suppose the problem you encounter with a new Windows 10 update is that its installation stops at a certain percentage or, more generally, that the update fails. In that case, you can try installing the update from Powershell.

NOTE: If you go to the Windows Update screen (Settings -> Updates and Security -> Windows Update -> Check for Updates), you may sometimes see an option called “Additional quality update available.” These updates address the latest Windows updates and become “proper” updates within a few weeks of thorough testing. However, these updates are still relatively stable, so you may want to try them if a recent update has broken Windows 10 for you.

Are there problems with latest Windows 10 update?

The latest Windows 10 update has caused several problems for users, including kernel panic errors, slow booting, unresponsive systems, game performance issues, and freezes. Microsoft has released several patches to try and fix the issues. Most users are unaware of simple steps that can be taken to resolve these issues.

How do I repair the latest Windows 10 update?

Are there any problems with Windows 10 version 21H1?

The 21H1 update mainly fails to install due to the following two issues: Corrupt System Files: A sudden power failure or a deletion of an essential system file (by you or the antivirus of your system) can make the system files corrupt, and this may fail the installation of the 21H1 update.

Does Windows 10 version 20H2 have any issues?

The current list for 20H2 as of today includes Errors or issues during or after updating devices with specific Conexant audio drivers — Conexant or Synaptics audio drivers might receive a stop error with a blue screen.

Should I update to Windows 21H1?

Windows 10, version 21H1, is designated for broad deployment. As always, we recommend that you update your devices to the latest version of Windows 10 as soon as possible to ensure that you can take advantage of the latest features and advanced protections from the latest security threats.

How do I fix a stuck Windows Update?

How to fix a stuck Windows 10 update
Everyone’s old friend Ctrl-Alt-Del could be a quick fix for an update that is stuck at a particular point. …
Restart your computer. …
Boot into Safe Mode. …
Perform a System Restore. …
Try a Startup Repair. …
Perform a clean Windows installation.