Home » What Is External SATA (eSATA)? 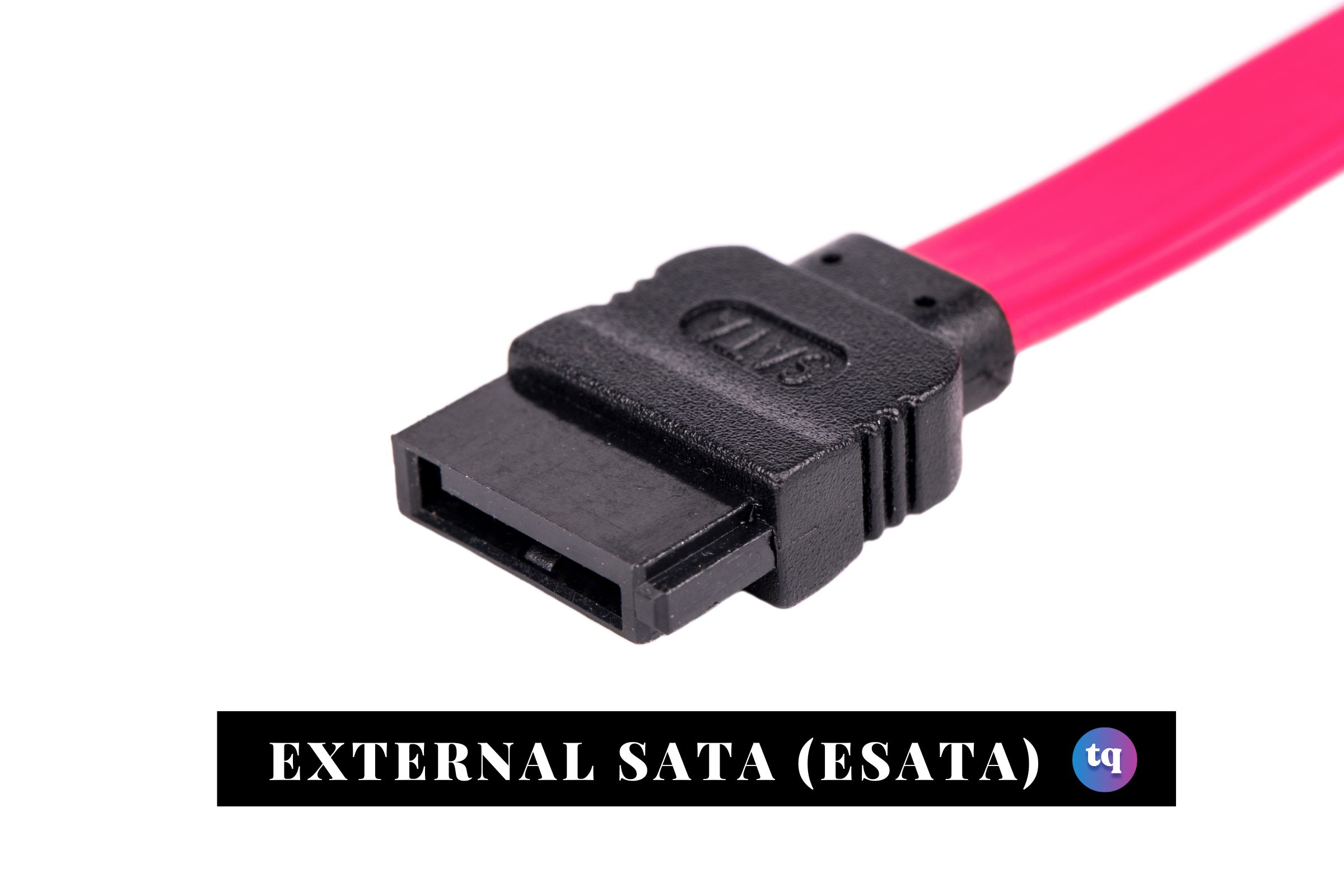 eSATA is an acronym for External Serial Advanced Technology Attachment. It is an interface for hard disks that help connect external hard drive disks with your computer.

This article discusses the eSATA port, connector, speed, and more.

So, read this article to know more about this port.

What Is External SATA?

Compared to the older parallel technology, the SATA interface is more modernized than ATA and offers a serial design for faster speed. Parallel cables are much broader and are only allowed to go as long as 18 inches (45.7cm). On the other hand, eSATA cables are thin and can be as long as 6.56 feet (2 meters).

With eSATA, the speed of SATA is increased to include exterior storage solutions. Although eSATA attains a transfer speed that is at least three times faster than USB 2.0 and FireWire 400, it does have one disadvantage. eSATA, in contrast to the above-mentioned interfaces, needs a separate power connector.

However, it is still a fantastic option for external disk storage. In contrast to USB and FireWire interfaces, eSATA doesn’t need to translate data between the interface and the computer. This improves data transfer speeds while reducing the demand for computer processor resources and removing the need for an additional off-load chip.

What is an eSATA Port?

An eSATA port is a type of interface that’s used with SATA-compatible external hard drives. Similar to IEEE 1394, FireWire 400, and USB, it enables quick data transfer rates for external storage drives. SATA is the internal bus interface that replaces ATA.

eSATA needs no form of data translation between the interface and the computer which allows for speeds that are up to six times faster than those of USB 2.0, IEEE 1394, or FireWire 400. Although eSATA has a solid speed benefit, it also requires an additional power connector. In other words, eSATA devices cannot function unless they are plugged into a wall.

The ability of eSATA-compatible devices to be easily disconnected and reconnected, much like a USB drive, is one advantage of this technology. This enables effective and quick data transfer, which you would need if you wish to transfer data from work to home or vice-versa, or if you want to easily move data between drives.

External Serial ATA is a subgroup of the extra specifications for the Serial ATA interface standard. It is not a necessary function but rather an optional extension that can be added to both controllers and devices.

Both connected devices must support the required SATA functionalities for eSATA to work effectively. Many SATA controllers from the early generation and drives don’t support Hot Plug capability, which is essential for the external interface to function.

Although eSATA adheres to the SATA interface specifications, it employs a different physical connector from the internal SATA connectors to better protect the high-speed serial lines transferring the signals against EMI interference.

Additionally, it has a 2-meter overall cable length as opposed to the 1-meter length for internal cables. As a result, the two cables cannot be interchanged.

How Does eSATA Compare With FireWire And USB?

FireWire and USB interfaces are both high-speed serial interfaces between a computer and external peripherals. FireWire is almost specifically used as an external storage interface. USB is more versatile and used for a vast range of peripherals like printers, mice, keyboards, and scanners.

Although these ports are used for external storage, the drives used in these devices employ the SATA interface. The hard disk or optical drive is housed in the external enclosure that employs a bridge that converts signals from the FireWire or USB interface into the SATA interface that the drive needs. Therefore, the performance of the drive as a whole is slightly reduced as a result of this translation.

These two interfaces had the hot-swappable feature, which was an advantage. The ability to add or remove drives from a system dynamically was often not supported by earlier versions of storage interfaces. As a result of this feature, the external storage market exploded.

The port multiplier with eSATA is yet another intriguing feature. This makes it possible to connect an external eSATA chassis that offers several drives in an array with a single eSATA connector. In addition to providing the ability to build redundant storage via a RAID array, this can offer expanded storage in a single chassis.

See also: What The Red Light On a Motherboard Means: How To Fix It.

Speed Differences Between eSATA and SATA

Speed is one of the major benefits eSATA has over FireWire and USB. SATA does not experience the overhead that the other two do when the signal is being converted between the external interface and the internal-based drives.

A simple converter between the internal and external connectors is needed in the housing because SATA is the standard interface for several new hard drives. Therefore, the speed of the external device should be equivalent to that of an internal SATA drive.

Here are the various interfaces, each has a theoretical maximum transfer speed:

The more recent USB standards are theoretically faster than the SATA interface that drives in the external enclosures use. Additionally, the newer USB still proved to be a little bit slower because of the overhead associated with translating the signals.

However, there is nearly no difference for the majority of consumers. As a result, eSATA connectors are less widespread today because USB-based enclosures are more convenient.

USB and FireWire have been great advantages to external storage. But, unlike desktop drives, the performance of these storage devices often lags.

A new external storage format called external Serial ATA has hit the market. Thanks to the introduction of Serial ATA (SATA) standards.

An industry standard for managing the various hardware used to connect external storage devices is the external SATA. It competes with some USB and FireWire standards to offer better data transfer speeds between hardware devices.

FAQs On What is External SATA (eSATA)

What is an eSATA/USB combo port?

It is a type of port that’s a hybrid between eSATA and USB. This means it can house both USB devices and eSATA drives, and connectors.

Are all hard drives SATA?

The two major types of SATA-enabled hard drives are Hard Disk Drives (HDD) and Solid-State Drives (SSD). Ultimately, SATA HDDs and SSDs have the same function. But they use an entirely different technology to store data.

Is SATA the same as SSD?

SATA drives are not so expensive and more popular than SSDs. But SATA drives also boot up slowly and are slower in retrieving data, unlike SSDs. If you’re looking for a hard drive with tons of storage space, then get a SATA drive since they usually hold terabytes of data.